Last month, the US federal government announced the release of about $1 billion to use in procuring 2,500 electric school buses in 400 school districts; including Washington DC, the US territories and a number of indigenous tribes.

Actually, last year saw around 480,000 electric school buses materialised in several school districts. However, they represent only one per cent (1%) of the country’s need for clean school buses.

Now that money is available for the purchase of additional clean school buses in all US school districts, as much as $1 billion has been released. Funds were appropriated in the form of grants under the “Clean School Bus Program.” VP Kamala Harris along with EPA Administrator Michael Regan named the recipients of the grants in a ceremony held in Seattle.

About the “Clean School Bus Program” 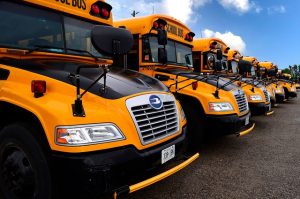 The program is actually part of the bipartisan infrastructure bill that was pushed for by Democratic lawmakers and President Joe Biden last year as a budget item for this year. The purchase is part of the Biden administration’s broader effort to speed up the country’s transition to zero-carbon vehicle emissions.

Carrying out the clean school bus program also helps in reducing some of the contaminants polluting the air in communities, especially in areas near schools. After all, protecting children’s health also denotes helping parents reduce, if not save money spent on health care costs.